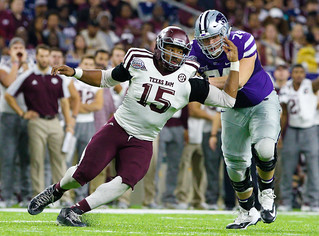 During the early pre-draft cycles, Texas A&M star Myles Garrett has been considered by many talent evaluators as the best prospect in the 2017 draft. His eventual draft position could depend on teams’ overall needs, but most prognosticators see him going within the top three picks.

After the NFL Scouting Combine it became fairly clear that Garrett should be the number one pick in the NFL draft. Of course, one major component of the NFL combine is the Wonderlic score, and he did not disappoint at all. Myles Garrett’s Wonderlic test score of 31 is quite good and it is well above average for the defensive linemen position. In fact, his Wonderlic score is the second best of all reported defensive ends in this year’s draft.

Can You Beat a 31? Try the Wonderlic Sample Quiz:

In addition to his impressive showing at the NFL combine, his on field performance with the Aggies in the highly respected SEC conference makes it very unlikely that Garrett will be bumped from the upper echelons of the draft. Interested in learning more about the Wonderlic Test? Read more here, or take our sample test for yourself and see how you compare to your favorite players.

Here are a number of pre-draft evaluation links of Myles Garrett’s potential:

Stay tuned for more updates on NFL Scouting Combine and draft information and any updates on the Myles Garrett Wonderlic score. We will update you as soon as we’re able to attain that information. Until then you can take a Wonderlic sample test by clicking the button below.

Just for the fun of it, here are some of the stats that Myles Garrett put up while at Texas A&M that had NFL scouts drooling over his potential:

The Wonderlic test has been given to NFL prospects at the Scouting Combine since the 1970s. It is a short cognitive ability test, lasting on 12 minutes and containing 50 questions. Prospects must answer questions quickly as they are only given about 14 seconds per question. As Myles Garrett is one of the top draft picks in the 2017 NFL draft, his Wonderlic test score will be one of the most paid attention to scores. Wonderlic scores average at about 20 for NFL players.