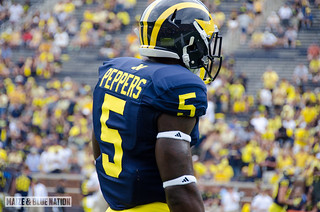 Few players will ever be as versatile on the football field as Jabrill Peppers was for Michigan in 2016. Despite missing the Wolverines’ bowl game due to injury, scouts are still very high on his ability. NFL scouts will certainly be chomping at the bit to see the physical measurables.

Jabrill Peppers’ Wonderlic test score has finally arrived and he did pretty well. Peppers reportedly scored a 26 on his Wonderlic test, which puts him in the middle of the pack as far as defensive players go. Wonderlic test scores for all NFL players average at about a 21, which makes Peppers score above average.

Regardless of how he’s used, Peppers will make some sort of impact at the NFL level. Before his positive drug test, he was undoubtedly going to be a top pick in the 2017 draft. It will be interesting to see if his positive Wonderlic test score can change the minds of any GMs.

Can You Beat a 26? Try the Wonderlic Sample Quiz:

Peppers was a jack of all trades for the Wolverines, so there’s unquestionably an above average understanding of offensive and defensive concepts when someone can play quarterback, running back, wide receiver, linebacker, cornerback, safety and kick returner in a single game. How he will be used at the professional level remains to be seen, but most likely he will fit into some sort of hybrid position not dissimilar to how the Pittsburgh Steelers leveraged the skills of Troy Polamalu.

Want to learn some more about Jabrill Peppers and his college career? Check out the following links:

What is the Wonderlic?

The Wonderlic cognitive ability test is a 50 question test consisting of mathematics and word matching questions that must be completed in a 12 minute window. It is traditionally used by companies to evaluate candidates for jobs during their hiring processes as well as by academic institutions for deciding whether or not to admit students.

The Wonderlic test has been used at the NFL Scouting Combine since the 1970s and we have a large amount of information on player scores and how well they have panned out in the NFL since that time period. While most of the Wonderlic scores attention is given to quarterbacks, the Wonderlic scores of defensive players like Jabrill Peppers has recieved more attention lately as coaches and scouts are stressing the importance of making quick and intelligent on field decisions on the defensive end of the game. The test has often been compared to an IQ test and has been seen as a quick measure of intelligence, learning, and decision making abilities of a person.