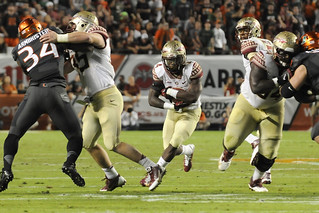 After a marvelous performance in the Orange Bowl against Michigan, NFL scouts are even higher than they were previously on Florida State’s Dalvin Cook.  While many prognosticators have pegged Leonard Fournette as the top pick in the 2017 draft, there are some who think Cook may have an outside shot to come off the board first due to his all around skillset.

Unfortunately, Dalvin Cook’s Wonderlic test score of 11 from the NFL Scouting Combine was nothing to brag about. NFL running backs average about a 20 on the test and a score of 11 is certainly on the low end of the spectrum, even for running backs. Despite his low Wonderlic score, it is unlikely that GMs will pass on Dalvin Cook at the NFL draft given everything else he did at the Scouting Combine and at Florida State.

Can You Beat an 11? Try The Wonderlic Sample Quiz:

One area where Cook showed his NFL readiness was in the Florida State passing game. With a young quarterback, he was often used as an outlet in 2016 and was able to catch 33 passes for 488 yards on the season, with an incredible average of 14.8 yards per catch out of the backfield. He also proved quite durable, despite being a smaller back than Fournette, carrying the ball 229 times in 2015 and 288 times in 2016. Perhaps most impressive in his stat line is his yards per carry. Despite being a known quantity and the focus of most opponents’ defensive gameplan, Cook managed to average 7.4 yards per carry in 2015 and 6.1 in 2016 in arguably the toughest conference in college football, the ACC.

Interested in learning more about Dalvin Cook? Go right ahead, we won’t stop you!

The Wonderlic test consists of 50 questions to be answered in 12 minutes. Aside from the NFL, many other businesses and organizations use this as a tool to gauge intelligence and quick decision making. In the entire history of the NFL, only one player has gotten a perfect score of 50. The Wonderlic test consists primarily of arithmetic and vocational abilities questions, and test takers are not allowed to use a calculator to solve problems. Because the test is only 12 minutes long, it is a race against the clock to complete the test on time.

If you follow the NFL draft, you’ve undoubtedly heard of the Wonderlic test, as it’s one of the many evaluations prospects go through along with various tests of speed, strength and personality. Follow Wonderlic Test Sample for additional updates on Dalvin Cook and how his Wonderlic test score will correlates to his NFL career as well as Wonderlic test scores of other top prospects.